Praise the Lord and His mighty hands for calming the storm that threatened our annual basketball competition slated for Sunday, 19 July 2009. The signal number 8 had been hoisted in the late hours of Saturday, but God answered our prayers and before sunrise the storm subsided and weather cleared up, making way for the much anticipate event that preludes our Church’s 17 Anniversary celebrations.

By 3pm brothers and sisters and their invited friends gathered at Tsuen King Circuit Sports Centre. The competition comprises 6 teams – 4 male and 2 female – with each team assigned to wear a particular shirt color.

Pastor Gavin led the opening prayer and proceeded to toss the jump ball for the first match, the male teams of SD1+2 vs. SD3+7. The family + professional group of SD1+2 started strongly and jumped to a 8-0 lead; SD3+7 slowly got back into the game but eventually SD1+2 held on to win the first game, 19-14. Compared to last year, SD1+2 fielded a stronger lineup this year with a couple of new players among invited friends.

After the guys, it was the girls’ turn, with the youth of SD3 pitted up against the Filipino sisters of SD6. The youth caught the Filipinas flat footed with 3 unanswered field goals to lead 6-0 and in the end coasted comfortably to an 8-2 win. Though comprised of many skillful players, the Filipino sisters could not keep up in stamina against their energetic opponent and allowed the youth to take many uncontested shots.

Not to be outdone by their girls’ counterpart, the boys of SD3 eagerly stepped in the next game in high gear and never left their foot off the pedal against SD5. The brother of SD5 were not exactly “”old-timers”” themselves and were stronger off the boards, but the SD3 youth’s lacking in bulk were more than made up by their accurate perimeter shootings and won 22-14 in a high scoring game.

The fourth game was between the ladies’ teams of SD4 and SD5. This game created lots of excitement and fun, not from scoring but from the endless scrambling for the ball at both ends of the court. Both teams played strong defense and clean shots at the basketball was hard to come by. The game wound down to the last seconds with neither team still able to score. Just when it appeared extra time was required, Jojo recovered a loose ball at the left side of the court, threw up a last ditch shot and scored at the buzzer! 2-0! The crowd, not to mention the cheering team of SD5, went wild.

After the four preliminary games came immediately the finals – the battle for third place between the guys of SD3+7 and SD5 was tight from beginning to end, with both team evenly matched up. In the end, only 2 points separated the two – 15:13, as SD3+7 prevailed and grabbed third place in the men’s competition.

The battle for third place in the ladies’ competition was between two language groups – the Thais of SD4 and the Filipinas of SD6. The Filipinas scored first only for the Thais to equalized – through an own basket by one of the Filipina players! There was redemption in the end, however, as the Filipinas managed to score another basket and won 4:2.

Up next was the ladies’ championship game between SD3 vs. SD5. The youth of SD3 appeared to be the favorites because of their speed and skills. But SD5 played effective defense and managed to curtail their opponent’s top scorers. In fact, after scoring an early basket, SD5 held on and won 2:0, in the process defended the crown they won last year.

The men’s championship game was clearly the battle between experience and vigor. SD1+2, being the more experience team, defended well and did not allow the youth of SD3 any open shots. The youth, on the other hand, tirelessly chased down every fast break opportunity and also did not allow any easy baskets for their opponent. Eventually, SD1+2, being stronger off the boards, prevailed 8:5 and emerged as the overall champion!

Amidst all the exciting on the court, there was non-stop excitement outside the courts brought to us by all the cheering squads. With pompoms, balloons, drums, banners, and all, they ensured the entire high octane atmosphere carried on from the sidelines. Afterwards, a panel of judges declared SD5 as the winner of the cheer leading competition.

Praise the Lord for a wonderful day! The event ended within the scheduled time and a big applause should be given to the organizers for planning and running the games smoothly. Everybody, whether taking parts as players, cheering teams or simply spectators, emerged victorious in this special competition. 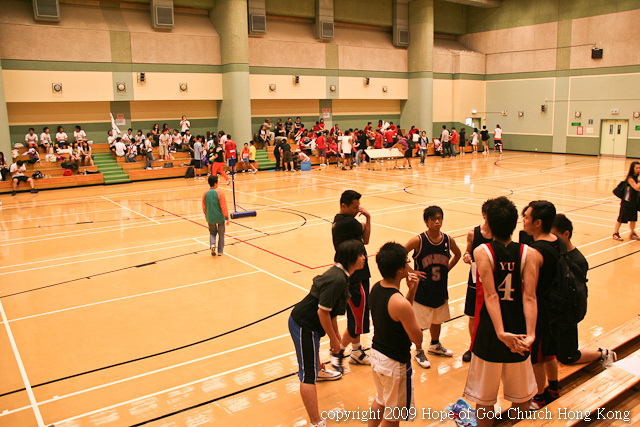 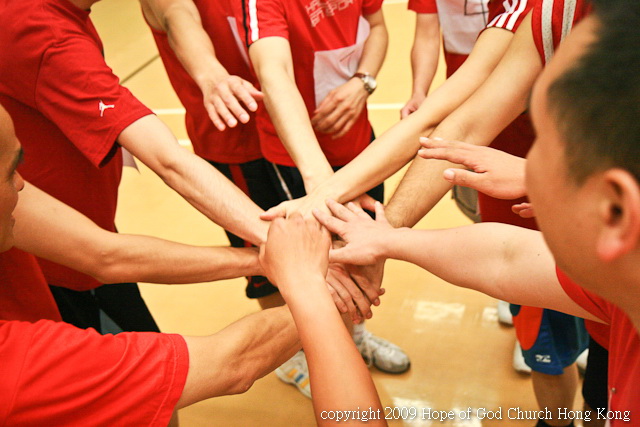 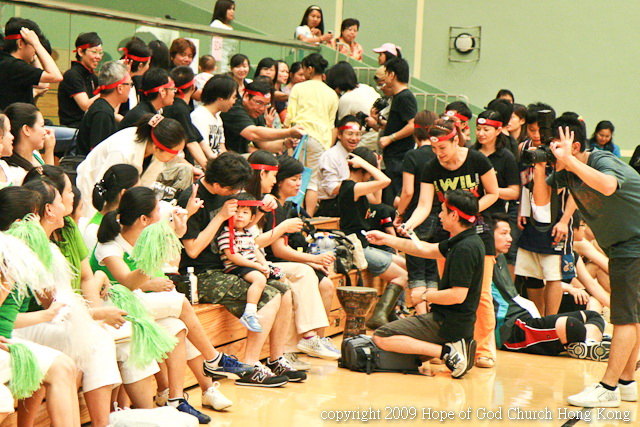 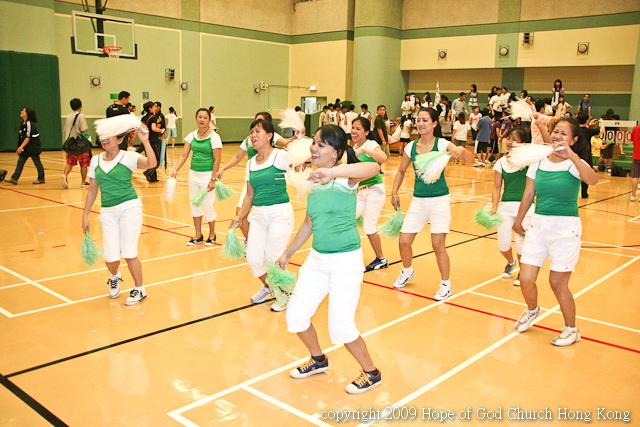 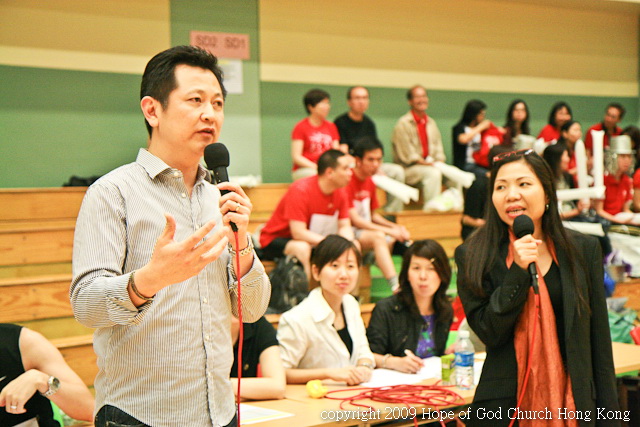 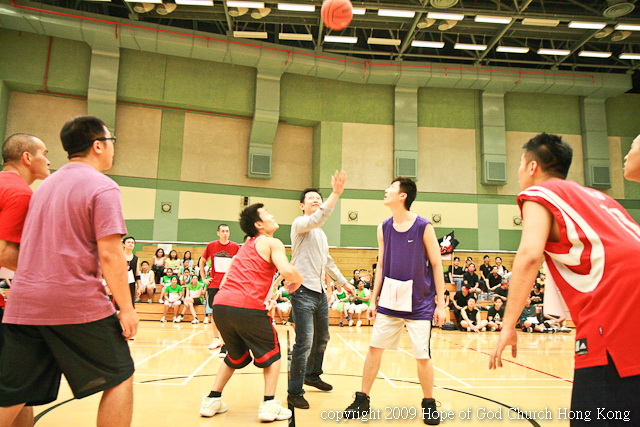 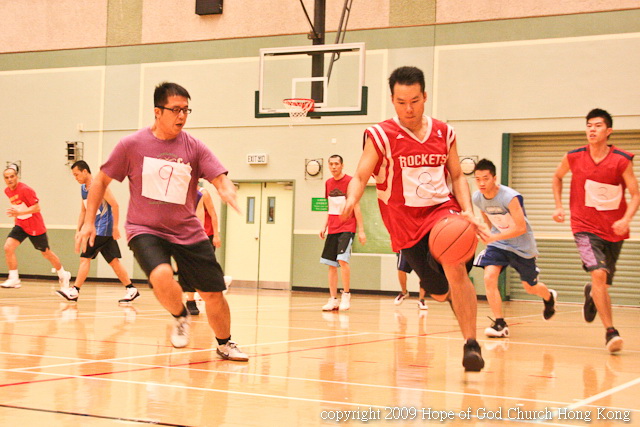 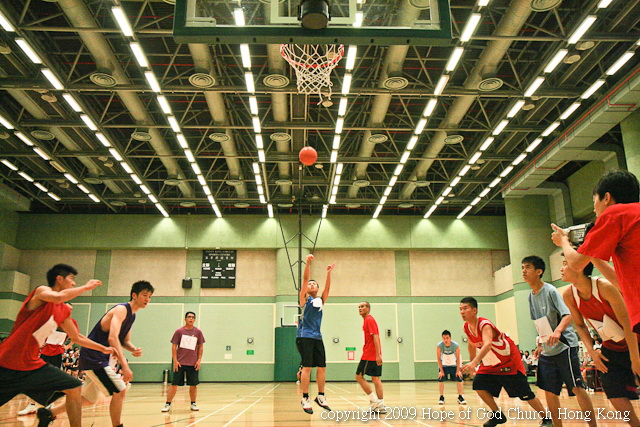 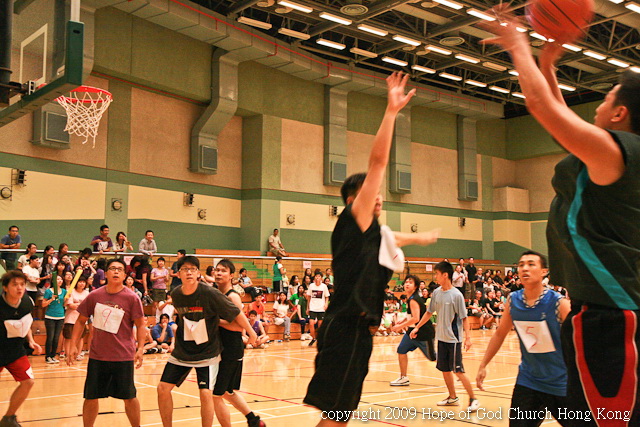 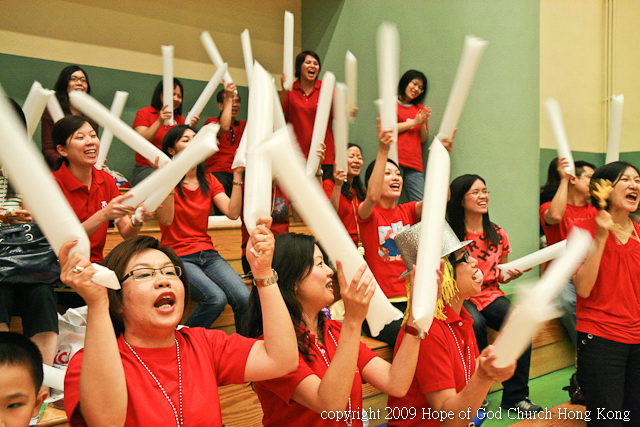 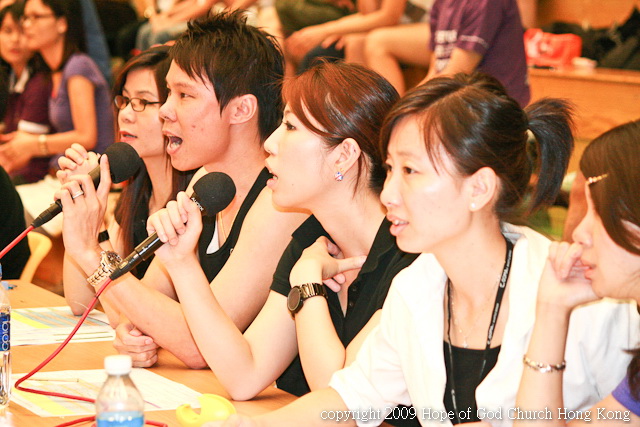 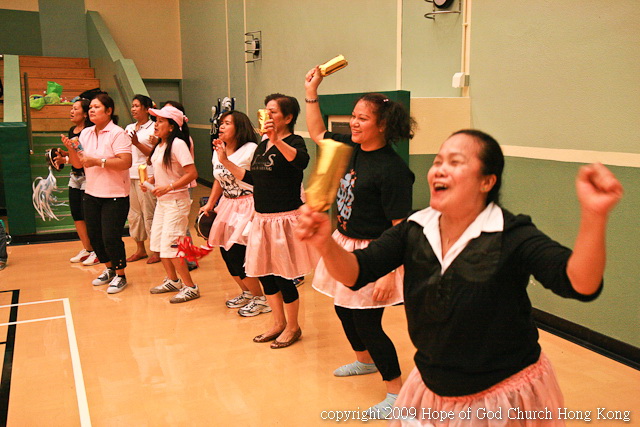 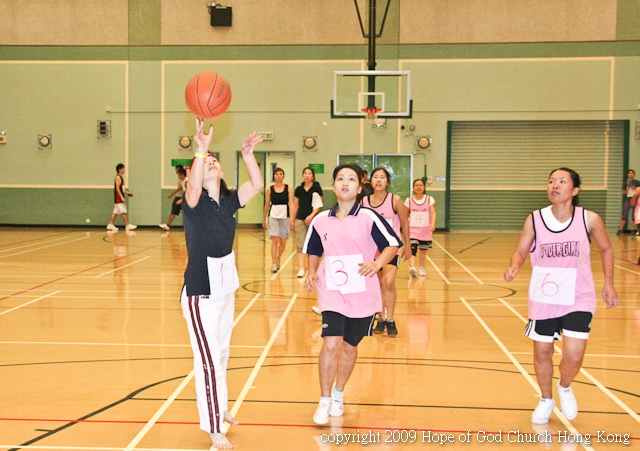 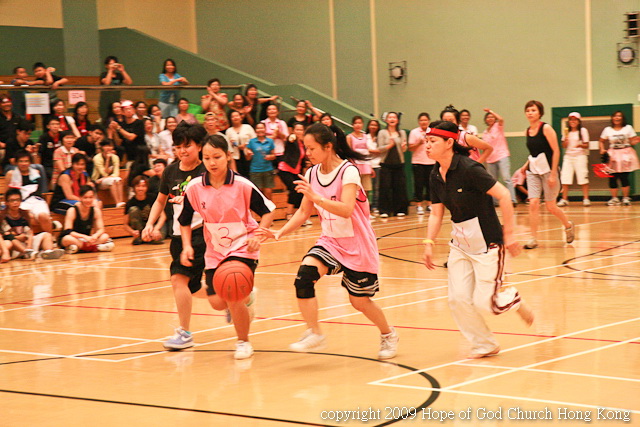 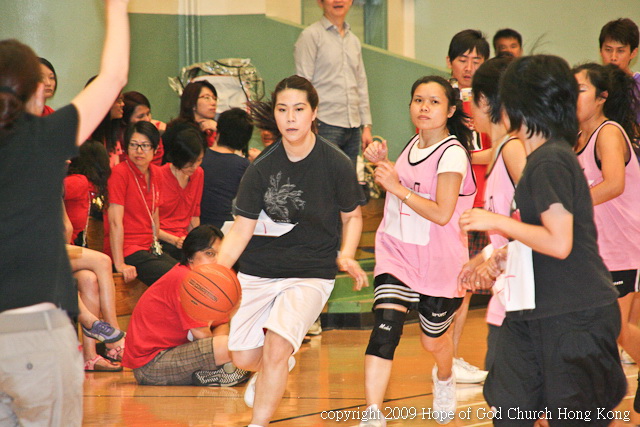 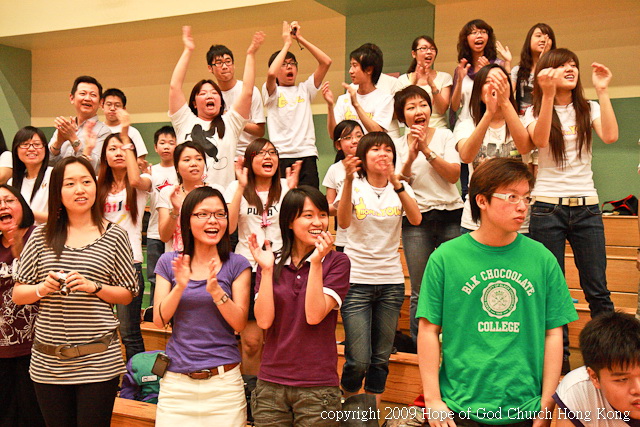 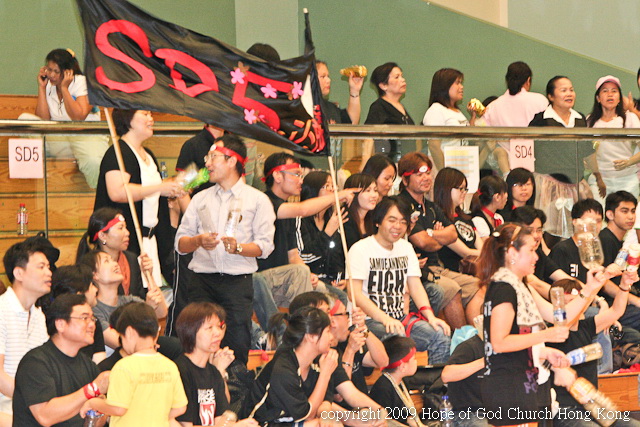 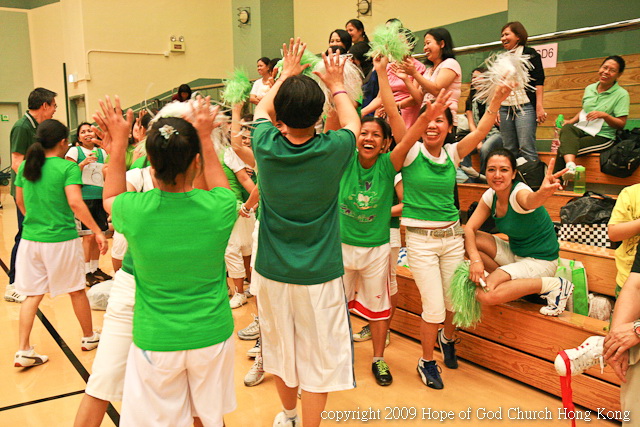 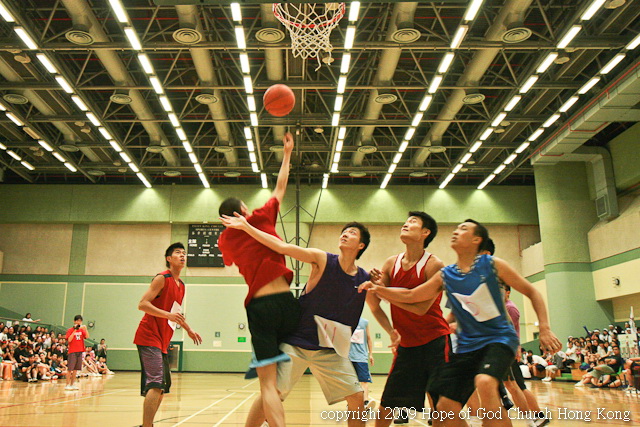 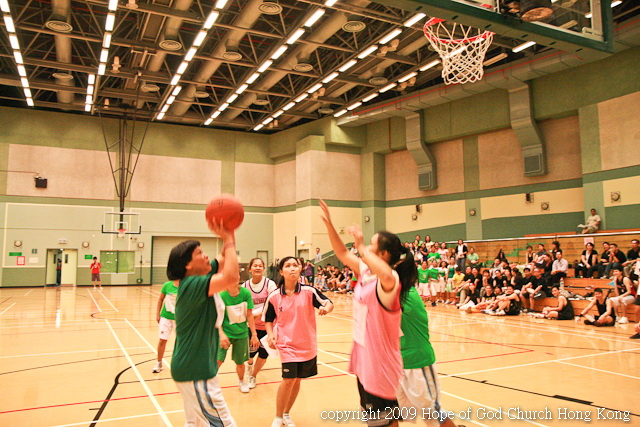 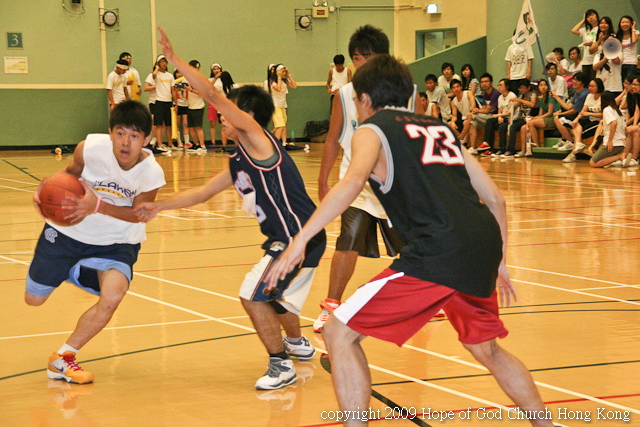 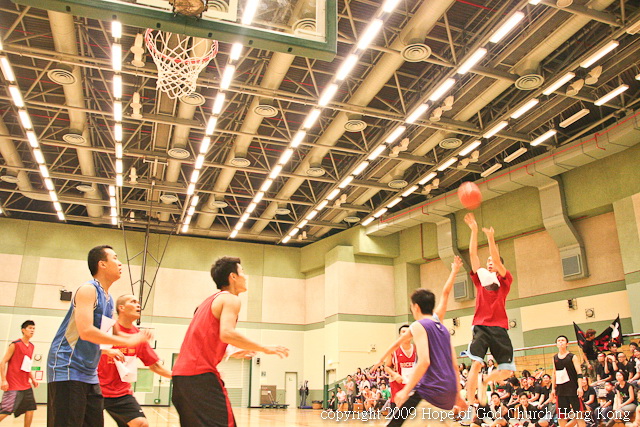 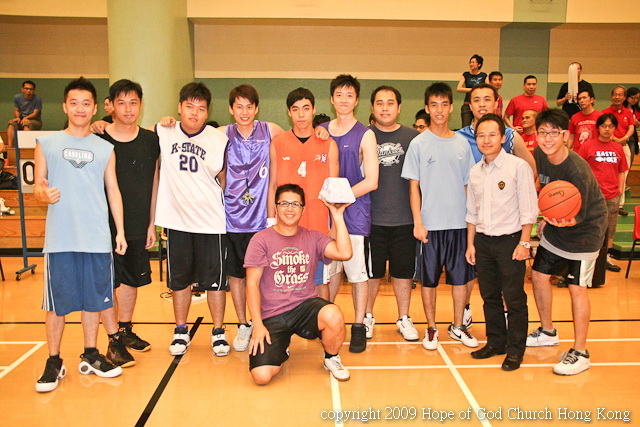 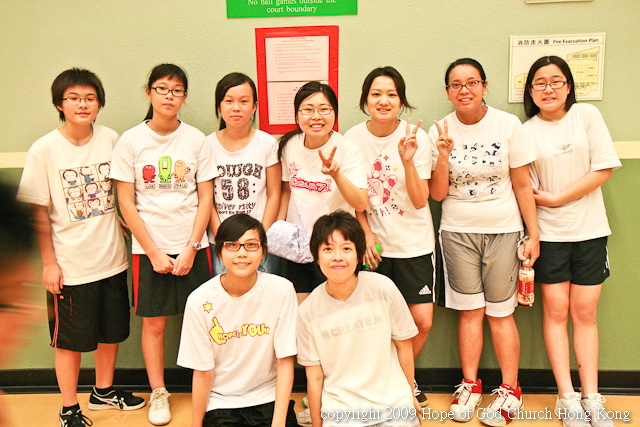 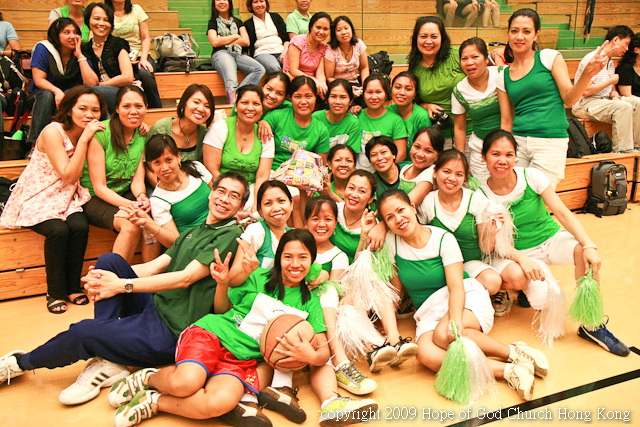 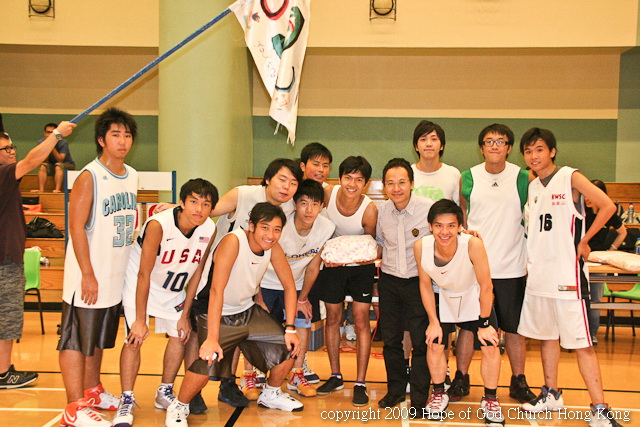 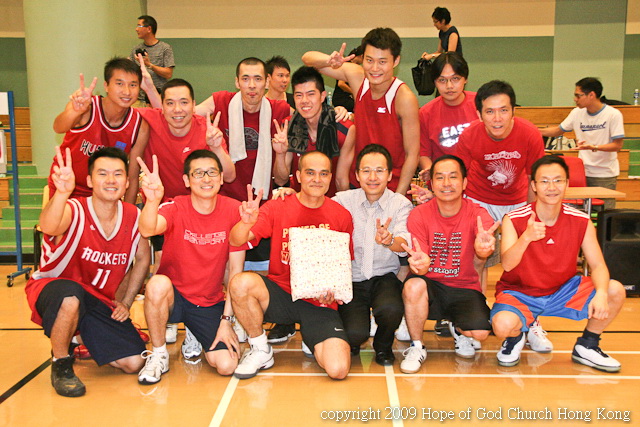