Praise the Lord that 24 brothers and sisters took the step of faith to delicate their life to Jesus Chris through water baptized. Water baptism is a dedication to follow the Lord and to be His disciple. It also symbolizes our death, burial and resurrection in Christ.

The ceremony was chaired by Brother Eric and translated by Sister Anny. After giving thanks to the Lord, Brother Philip led the congregation to praise and worship our Lord. There were no fewer than 70 brothers, sisters and friends gathered in Repulse Bay to witness this wonderful moment.

The first testimony was given by Sister Zoe from SD5. Before accepted Christ, she was a negative thinking, short tempered and non-confidence person due to her hearing loss. Working in the special school as teaching assistant was not happy for her because of pressure and hardships; she felt lost of direction and no peace in her heart, but her Christian colleagues always prayed and encouraged her. A brother invited her to visit Hope of God church and she accepted Christ on 21 January 2007. By learning the word of God and encouraged by brothers and sisters, she was changed and she became more proactive and couragious. Though she is weak in hearing, Sister Zoe is willing to dedicate her live to serve God wholeheartedly. Hallelujah!

Brother Hei from SD5 testified that before accepted Christ as personal savior, he did not have confidence due to the hearing loss and he did not know how to express love to others. In the beginning of Christian walk, he did doubt God because of the broken relationship with God and he even wanted to give up. Through the encouragement from brothers and sisters, he learned the importance of having an intimate relationship with God and lifting all burdens to Him. Although these brothers and sisters were weak in hearing, their testimonies were impactful. Our heavenly father never forsakes us, and He always protects and loves every one of us. Praise the Lord!

Brother Solomen from SD3, testified that he truly experienced God through prayer, as the Bible stated “…Be not afraid, only believe.” (Mark 5:36), Brother Solomen had joined the Christian gathering in high school, but he did not commit wholeheartedly. Until he studied in University, he faced lots of disappointments and he prayed to God, “”If you are real, show me where you are.”” Later on, he was invited by brother Adrian to the church, God did answer his prayer and now he is willing to serve Him wholeheartedly.

Sister Maricel from Filipino group shared how God has transformed her character. She used to be a bad-tempered person and would take revenge on those did bad thing to her. Sister Maricel used to serve in a catholic church in Philippines. After starting her new life in Hong Kong, she was invited to Hope of God church. Through all the teaching, fellowshipping, and serving with brothers and sisters, God had molded her ; now Sister Maricel has found true joy and peace in her heart, and she also decides to follow Jesus and obey God faithfully. Praise the Lord Jesus Christ!

After the testimonies, Pastor Gavin prayed and presented the certificates to the new lives.And accompanied by their shepherds, they went into the water to be baptized by Pastor Gavin, Brother Michael and Brother Allen.

Everyone stayed until the end of the ceremony before making their way home on this special occasion.

Praise God for the new creations. May the Lord continue to equip each of us and lead all of us to venture into the new realm ! 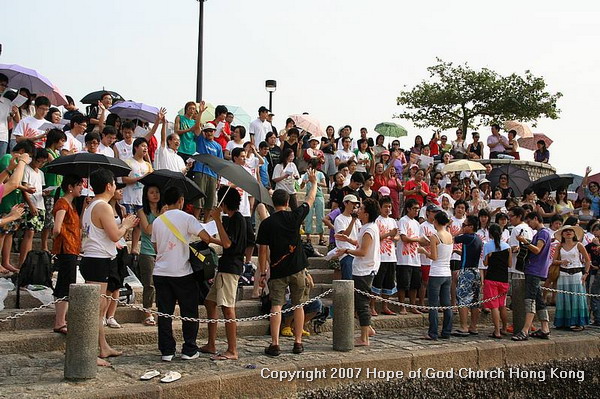 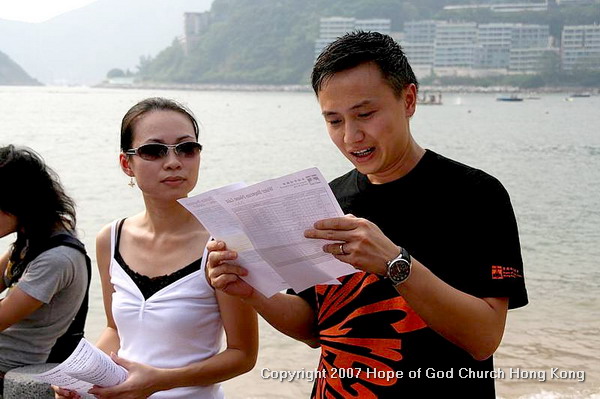 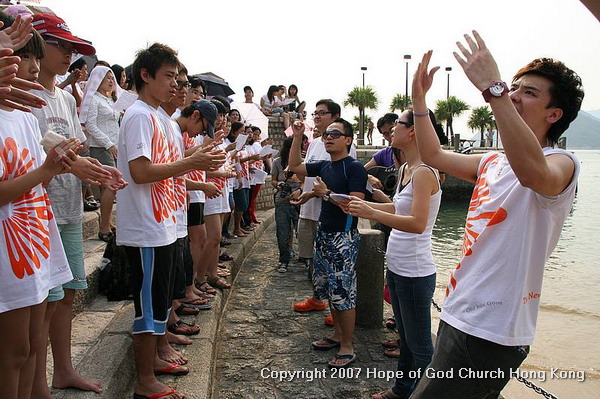 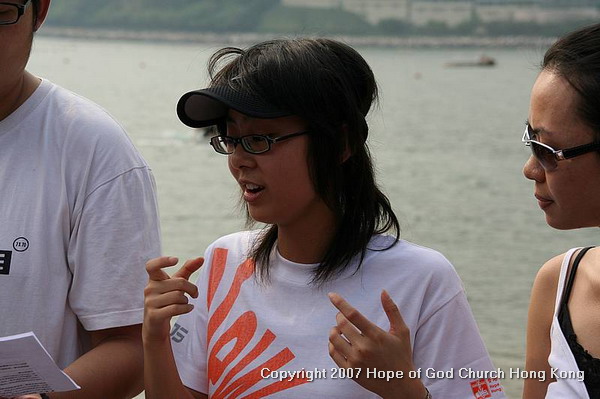 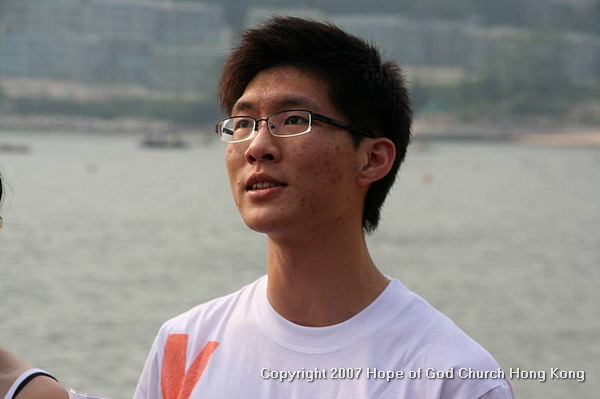 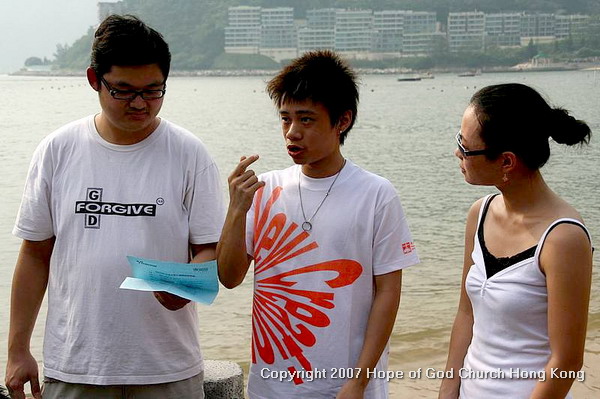 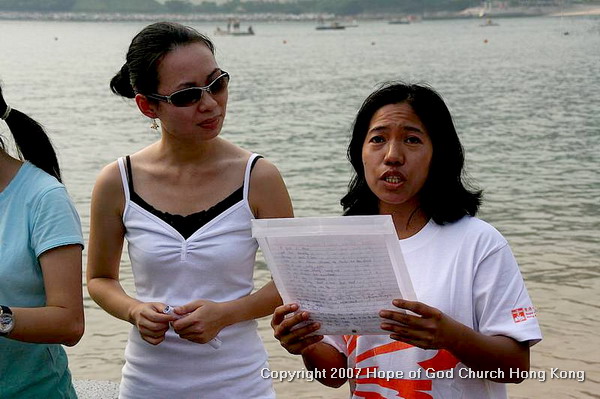 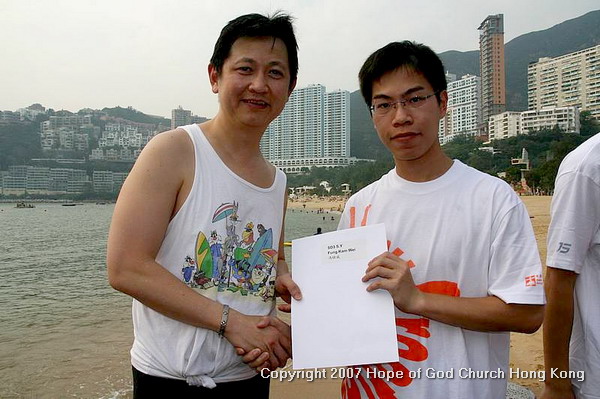 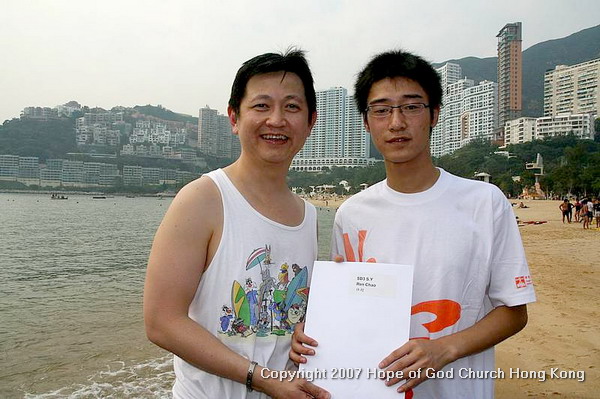 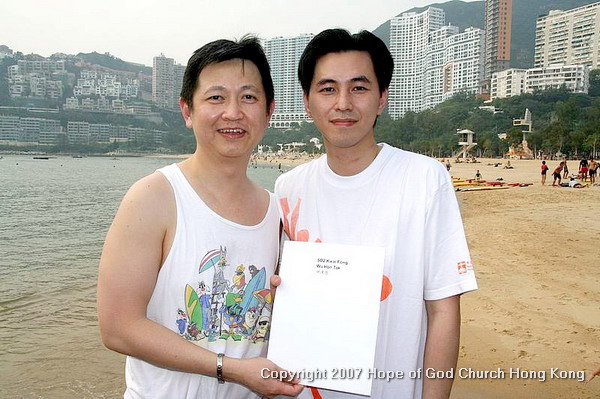 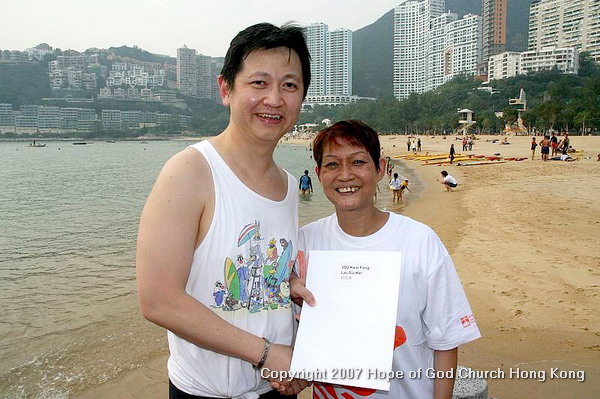 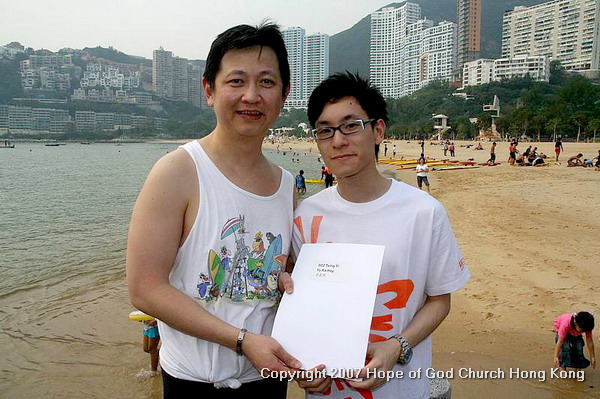 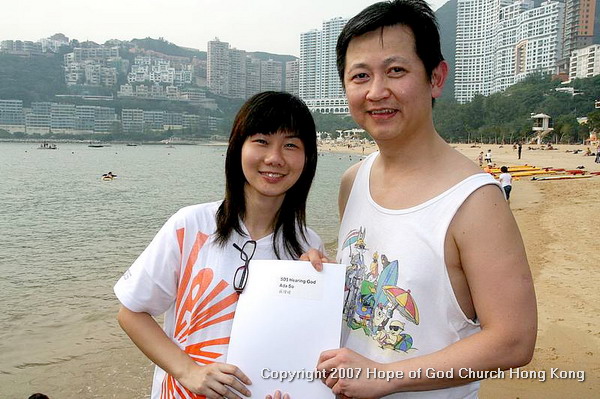 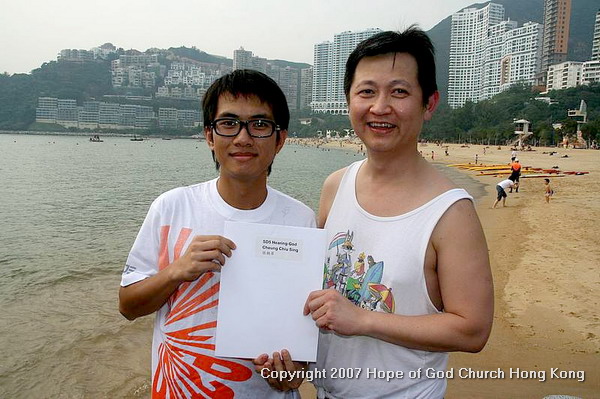 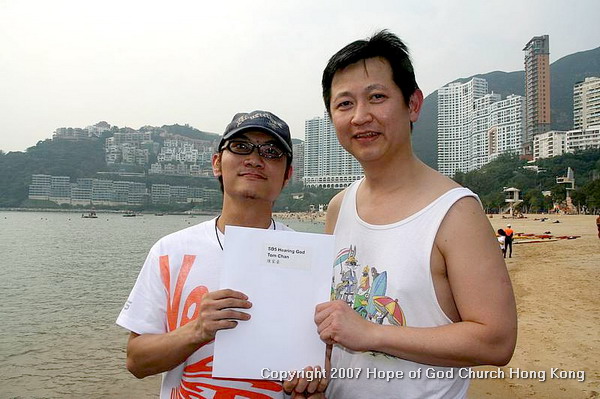 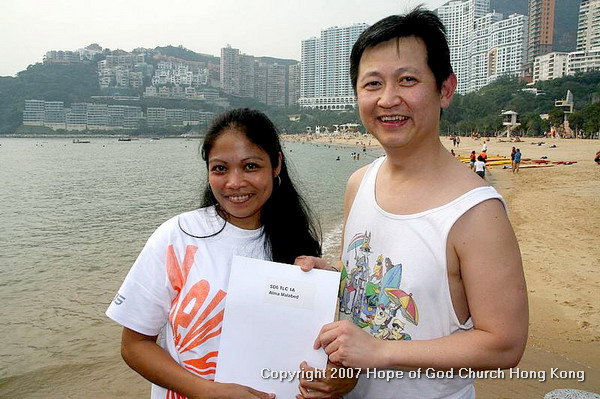 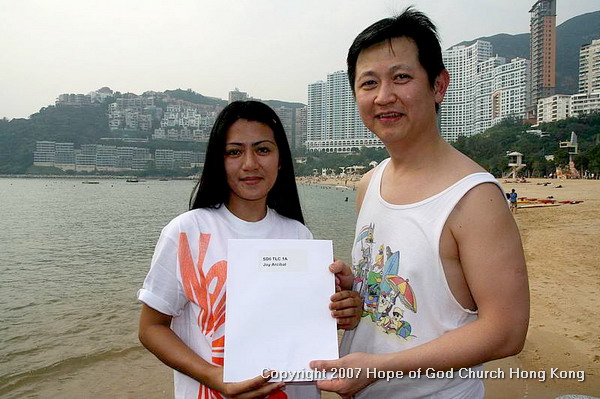 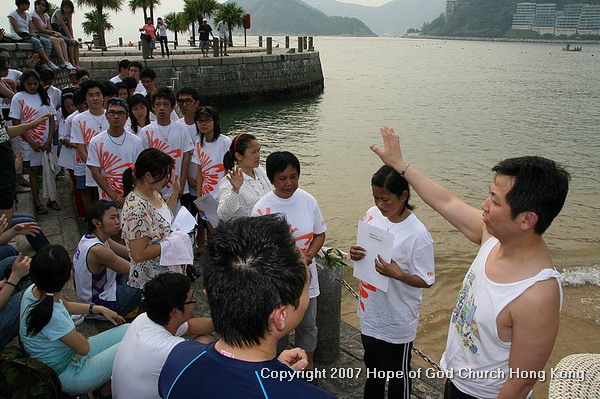 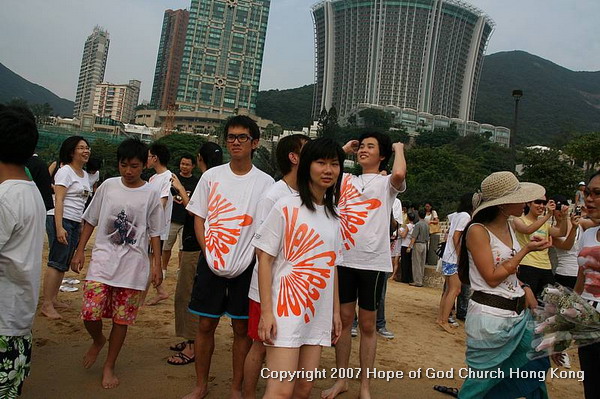 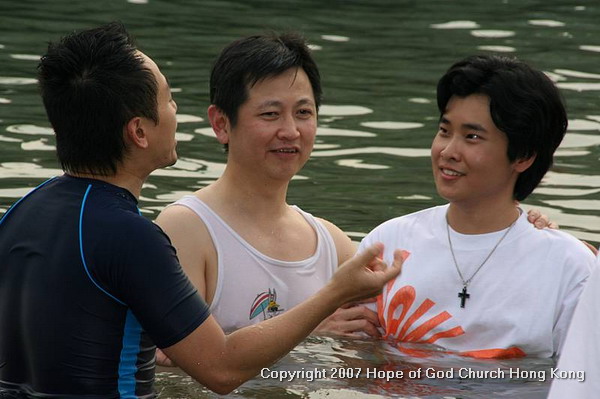 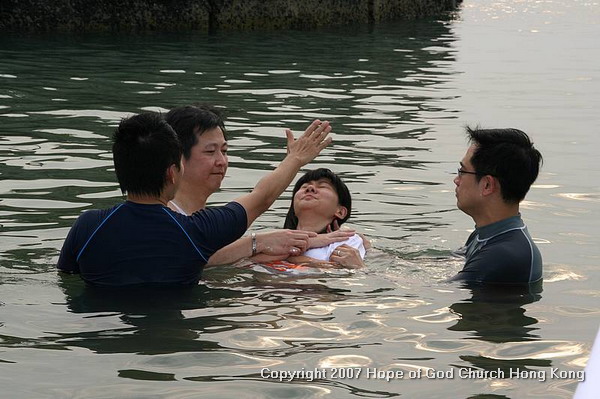 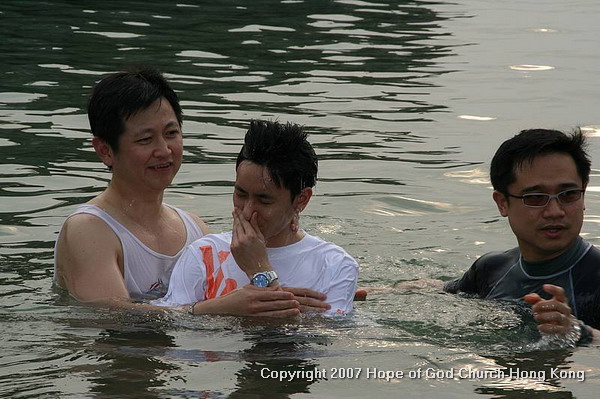 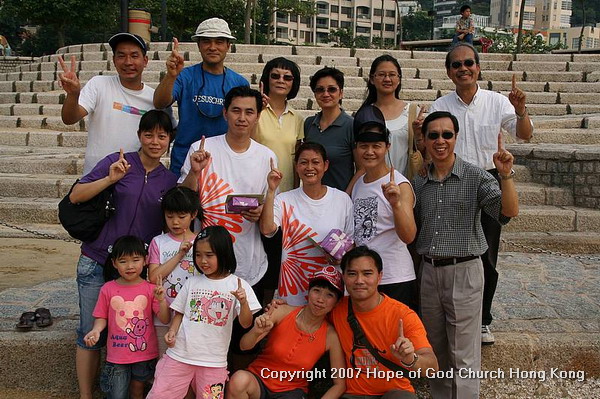 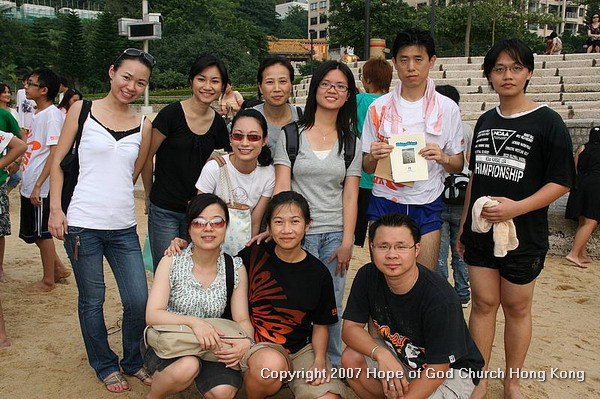 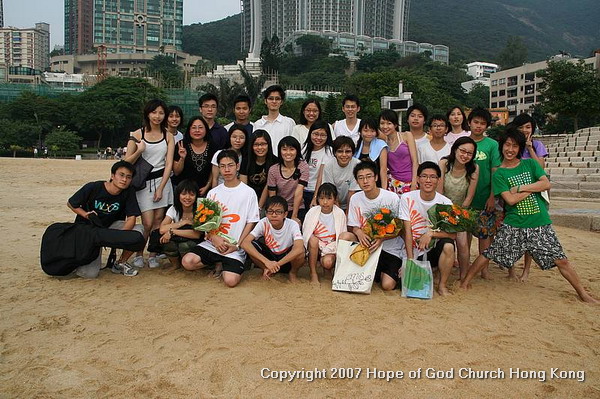 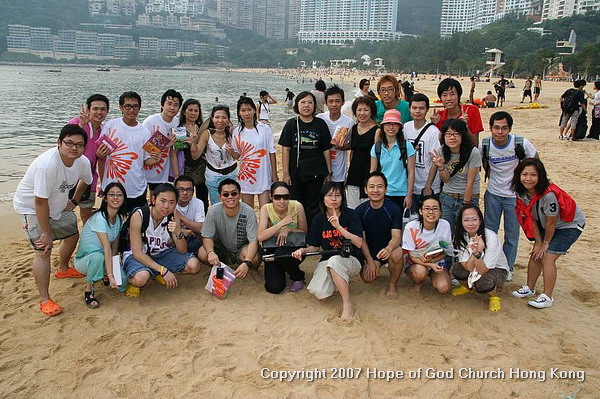